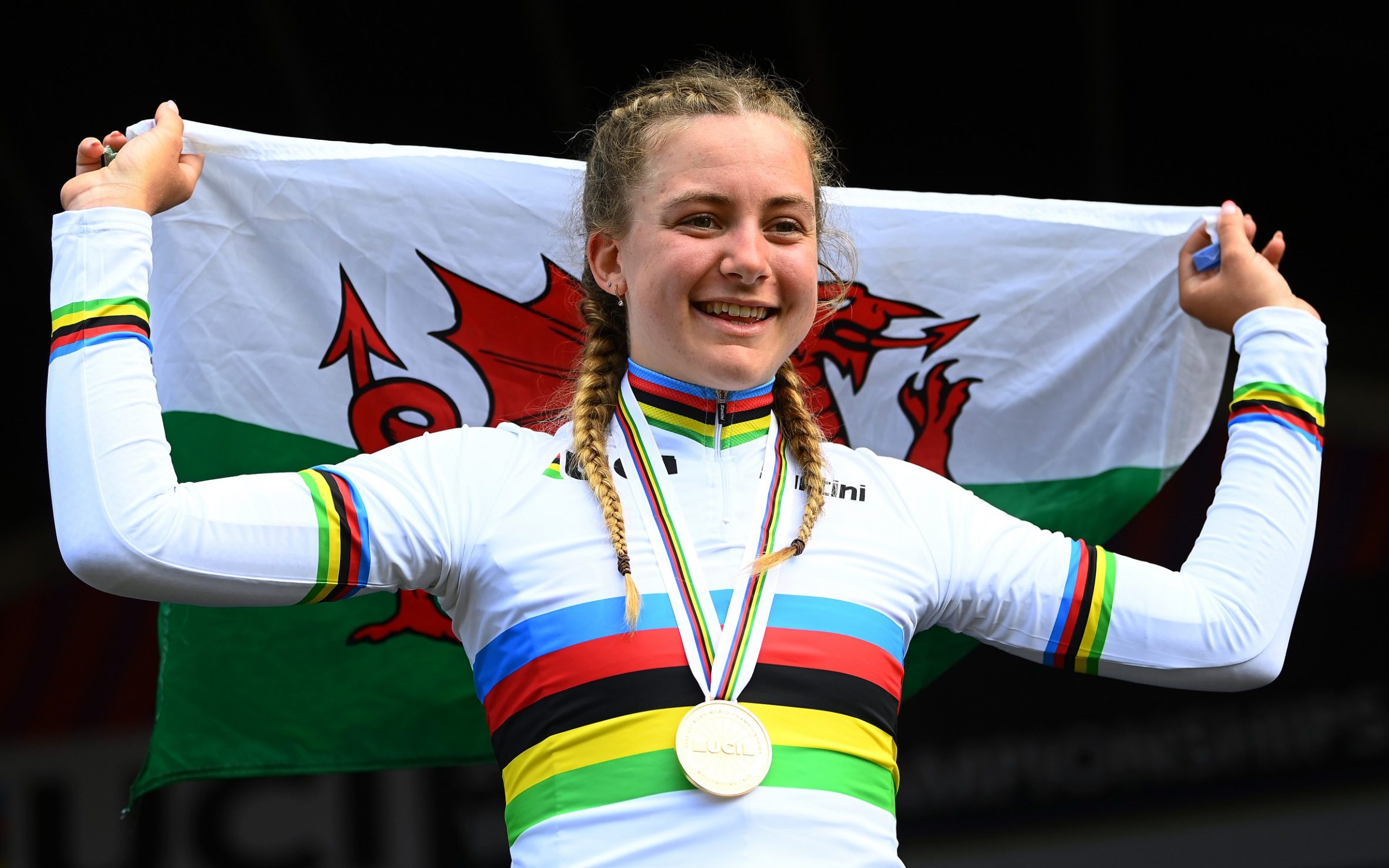 The 17-year-old announced herself at this time last year, in Flanders, when her father, former Paris-Roubaix winner Magnus Backstedt, famously broke down in tears as he commented on Zoe’s win in the road race at the age of 16. for juniors. .

Since then, Backstedt has won the Under-19 Tour of Flanders, the Junior Cyclo-cross World Championship in Arkansas and the Madison World Junior Track Championship title. Tuesday’s win, which came on the same day as fellow Welsh rider Josh Tarling, won the men’s junior title, making her the only cyclist in cycling history to be world champion in four disciplines at the same time. She also won an internship contract with the professional team EF Education-Tibco-SVB, of which she will become a professional football player next season.

It’s safe to say it’s been an absolutely phenomenal year for the younger Backstedt sister, who lives in blissful chaos at the family home in Pontyclun, South Wales, alongside mother Megan, a former British and Wales National Road Race Champion. , father Magnus, and older sister Elynor who rides for Trek-Segafredo.

And it could get even better. Backstedt will defend her junior title on the road on Saturday. It’s safe to say she’s a firm favorite judging by the strength she put down on Tuesday. The Welsh rider put in a whopping 90 seconds on her closest rival, Germany’s Justyna Czapla, in the 14.1km time trial. Despite being on junior gearing, Backstedt was actually faster than elite women’s winner Ellen van Dijk at the first check (although the Dutch had to go further and had a higher average speed at the end of her effort).

There is no doubt that Backstedt is the most exciting young British female talent in years; a potential heir to Lizzie Deignan. A rider capable of challenging for elite world and Olympic titles within a few years. That’s not to disparage the other exciting young British riders coming through, such as Pfeiffer Georgi, Anna Henderson or even her own sister Elynor. But it feels like there’s something extra special about Backstedt simply because of the way she cleans up in each discipline.

Like Tom Pidcock on the men’s side, Backstedt clearly enjoys mixing it up. And she does it all with a smile on her face. The cameras enjoyed Backstedt laughing and laughing as she remembered singing God Save the “King” onstage on Tuesday.

Who knows if she can get started. She has now set the bar pretty high and there have been other exciting young talents who have either succumbed to the pressure or suffered serious injuries.

For now, we just have to enjoy the emergence of a special talent. Starting on Saturday. Can Backstedt double this year by winning both the time trial and the road race on Saturday, having won silver and gold last year? This year’s 67.2 km route contains almost 1,000 vertical meters.

“I mean, of course I’ll try,” she told Telegraph Sport last week. “It won’t be easy because everyone will mark me. They know what I look like and they won’t let me escape. They will want to sit on me, which can be frustrating. But I know that. We just have to use different cards…